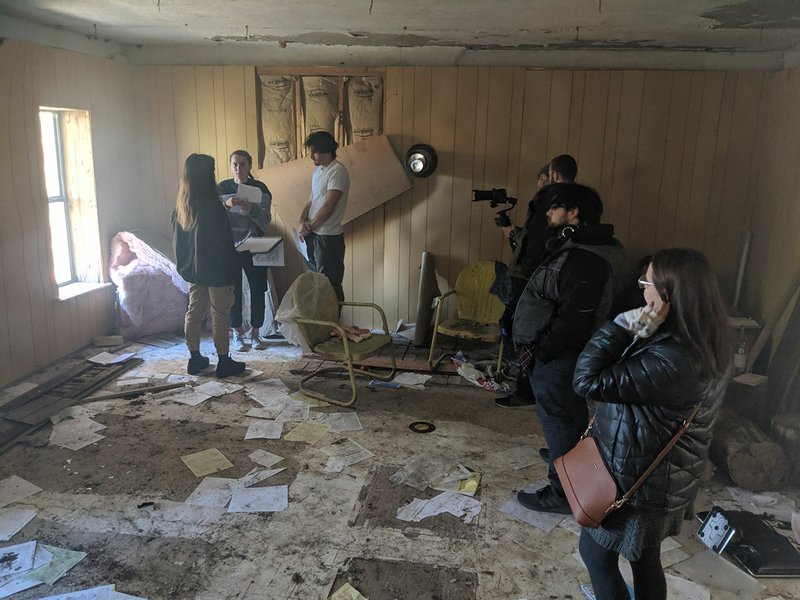 A behind-the-scenes look at the filming of “Dust” by student filmmaker Paula Blanco Perez, which was partially filmed in Hot Springs. – Submitted photo

With only a few days to go until submissions close for the third annual Hot Springs International Women’s Film Festival, its director says he’s already having trouble fitting everything into a span of just two days.

“The Women’s Film Festival has been gaining momentum 10 times faster than the Horror Film Festival. With this year’s festival, we have so many submissions that we should really be having a four-day festival,” theater owner and festival director Bill Volland said.

“I mean, some of it is better than probably half the stuff on Netflix.”

As of Friday, Volland said he has 40 different films selected, significantly increasing the number shown last year. The films range from feature-length documentaries to experimental and student efforts. The festival also features multiple Arkansas-made films, as it has in year’s past, but festival organizers have added a block for films with a local flair to them. Volland said he wanted to play up local films and make them distinguishable.

The block will feature the film “Dust” which was partially shot in Hot Springs. The student film by Paula Blanco Perez, a native of Spain, is set in “an apocalyptic world after a modern world war,” and follows “a young couple arguing about the risks of participating in the government’s new program, ‘Remember.’ The program consists of a pill that erases all memories and offers a fresh new start, as well as the opportunity of finding ‘happiness’ again,” according to the film’s overview.

“Dust is very important for me because it represents the way I see life. It is a portrait of myself and my values, while it plays with a balance between sci-fi and realism, my two favorite genres. The movie approaches the topic of strength when facing identity and life itself,” Perez stated in her director’s statement.

“We could all use the easy path to happiness, avoid all the obstacles and try to be happy, even if we must renounce who we are. But that is not the answer. Our past is what makes us who we are, and all our tragedies and mistakes are lessons that teach us the way in which we can reach happiness. If we can’t deal with the pain and suffering that are part of life, there is no way we will ever reach happiness being who we are,” she said.

In the past two years, feature-length and documentary shorts have dominated the Hot Springs International Women’s Film Festival and this year is no exception. Nine of the films selected so far are documentaries covering hard-hitting topics like sexual abuse in the sports world to the women dedicated to ending poaching in Africa.

Each film featured in the festival has a common purpose — to display the creative power of a woman. In order to be included in the festival, Volland said a film must either be written, produced, or directed by a woman, feature a woman as the leading star, or have a story that follows a woman.

“We’ve been doing the horror festival for almost 10 years and this one has caught up already as far as submissions go,” he said.

“A lot of the reason for that is because all the genres are open. If you have a horror film, you can put it in, a romance, a documentary,” he said. “Anything you want to put in almost; although, it has to be either done by a woman, produced by a woman, directed by a woman, has a woman in the starring role, or is about women. It leaves it more open. I think that’s why we get so many submissions faster.”

Volland said he plans to hold workshops and networking opportunities again this year as several filmmakers have already agreed to attend.

The festival will be March 28-29 at the Hot Springs Central Theater. 1008 Central Ave. A two-day festival pass is $60 and a single-day pass is $33. Tickets for a half-day of film screenings are $20 and tickets to a single film are $15. They can be purchased at https://hotspringswomensfilmfestival.com/.

Richmond Folk Festival delights first-timers and those who have been attending for years |...

Rebellion Festival 2019: Your ultimate guide, by the bands who’ll be...