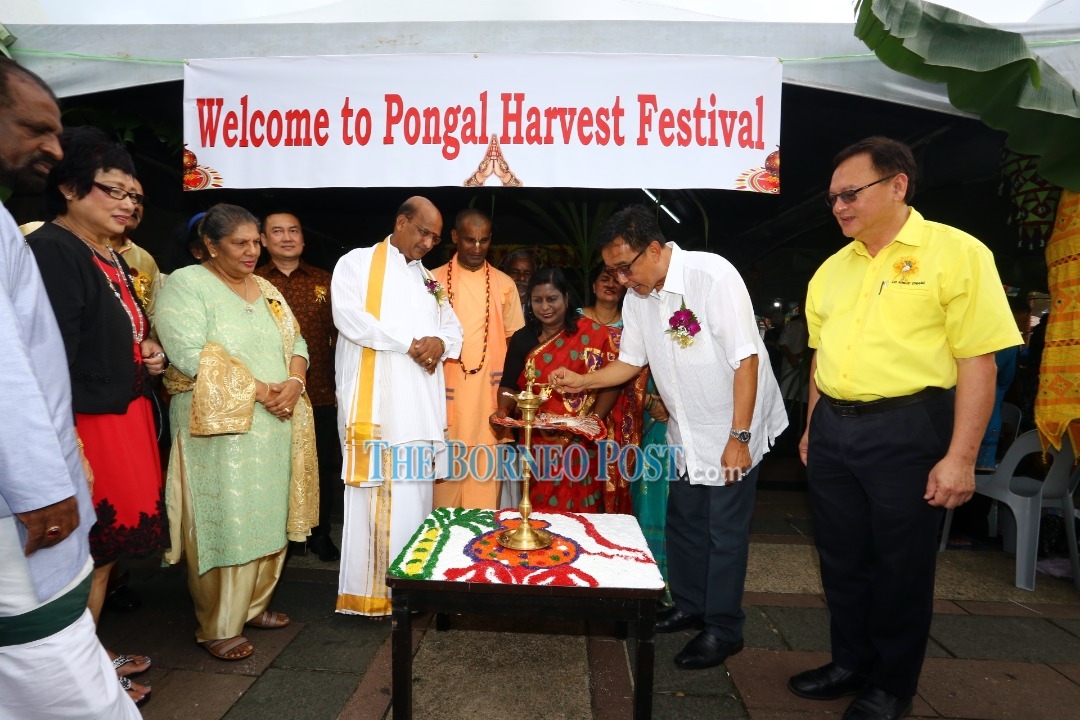 He said that the festival has the potential to be held on a larger scale and the ministry will assist to get it to the stage of being able to be accepted into the tourism calendar.

He added that although the Hindu community is a minority here, its celebrations are celebrated by all.

“Sarawak has diverse races and we ensure all community don’t feel like they are being sidelined, by celebrating everything together. This is the uniqueness of Sarawak and we do hope those living in West Malaysia can see how we handle this in Sarawak.

“Despite our small population of 2.8 million, we have so many different races, religion and ethnic groups but we are able to understand and be tolerant of everyone and respect each other,” he said.

Abdul Karim elaborated that the Pongal Harvest Festival is similar to other races’ harvest festival here like the Dayaks, and in fact, is celebrated all over the world.

He was referring on how the celebration was made an issue in Peninsular Malaysia due to strained relations, and it happens to many communities there.

Thus, the state government formed Unit for Other Religions (Unifor) to look after other religions are being assisted and flourish well, he said.

Meanwhile, Abdul Karim revealed that many projects are ongoing at the Kuching Waterfront area to beautify Kuching and buildings around the city.

“It is one of our effort to make Kuching a livelier place and very attractive to tourism. Among them is the water park which include a water cascade near the Astana. It is to extend our Musical Fountain, with the walkway going to Astana and connect to the S-Bridge.

He added that the Kuching Waterfront will be extended right to the Brooke Dockyard, making the entire length of the waterfront to about two kilometres.

Aside from that, Abdul Karim said the ministry plans to bring back the old bones found at Niah Cave from Florida. There are more than 100 human bones which are not intact due to its old age.

Similarly, Sarawak has got a beautiful museum, which is also the second largest in the South East Asia. There is also the Natural History Museum which is currently under renovation and will be used to showcase the state’s very rich culture, he said.

Earlier, Malaysia Hindu Sangam president Datuk Mohan Shan said the celebration is celebrated all over the world on January 14 annually.

It is an auspicious month to paddy planters to harvest their fields, and the festival is held to show respect and thank the Sun God for the harvest.

He said that though it has significance of religion, but it is more of a cultural festival with the colourful traditional costumes, the cultural dance, cooking of the rice in a traditional pot.

“It is not a problem for anyone to join in and celebrate together. Even Hari Raya is celebrated by everyone, and not only just the Muslims. In Sarawak there is no issue on such celebrations. This is unique and we have to safeguard this uniqueness.” Stride out with this year’s socially-distanced Walking Festival

Haryana govt to give festival advance to its employees : The Tribune India

The best of what’s left: How to experience the Fayetteville Roots Festival if you...