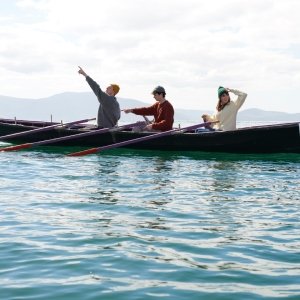 Let’s make an exception and start from the conclusion so that if you read only one paragraph from this review you will get the most important message. Catch of the Day is a superb show, achingly funny, with great traditional Irish songs and a cast of incredibly talented actors/singers/musicians, the like of which I have not experienced in a while. I laughed, I sang, I clapped, and I even learned a thing or two about Irish history and joined the whole audience in a well-deserved standing ovation at the end. Keep reading if you want to know more.

Based on a true story, the show tells the exploits of a group of Irish fishermen in Dingle Bay that in 1966 catches a beautiful big and expensive sturgeon. Excited by the opportunity of making a lot of money, they are soon informed that the fish cannot be sold as the law states it needs to be given to the Queen of England or the Head of State. This pretext is used to open a window on the relationship between Ireland and England, culminating with a version of the song American Pie summarising the last few centuries of the Anglo-Irish history. The fishermen do not want to give the sturgeon to the Queen of England, so offer it to Eamon De Valera, President of Ireland, and then to the nuns. I do not want to spoil the rest of the story, but the sturgeon is involved in more adventures, involving also Queen Elizabeth and Prince Philip.

Red Fox Theatre is the company behind the show and the four actors on stage are Callum McGuire, Jonty Weston, Anna McCormick and Ben Simon. They deserve to be mentioned because they are exceptional. The actors welcome the audience with a string of traditional Irish songs, played and sung live and everybody is clapping, cheering and in a great mood from the start. However, their real talent comes out during the show, as they are not just good with music, but they are also very talented actors, with a range of facial expressions, physical and vocal skills to make even some big-name actors blush in comparison.

I may be slightly biased here because I have a passion for musical and Irish music/dance, however, the audience seemed to enjoy the show as much as I did. I enjoyed the quirky plot, the musical pieces and ability of the actors to switch from fishermen to nuns to English nobles with the use of just some very simple props like hats or tea towels. This is an ideal show for a night out with friends and family to have some carefree fun and experience the magic of theatre where a tattered hat is enough to transport you to a boat in the middle of the sea.

Ireland, 1966. Joe Welch, a skipper, sails into Dingle Bay with a very unusual catch…what follows is a ridiculous series of events, involving Eamon De Valera, Queen Elizabeth and a whole lot of nuns.
​
One fish can make a big splash.​
A true story, Catch of The Day is a raucous and little-bit-political play with a lot of heart, a lot of laughs and live trad-inspired music, all set in a Dingle pub.
​
Fresh from its award nominated run at Edinburgh Fringe and sell-out shows in London and Oxford, Catch of The Day returns to its birthplace this summer for a 3-week run.

Around 4 lakh devotees likely to visit Vaishno Devi during Navratra festival in J&K:...

Sports Illustrated ‘Shatters Perceptions’ & Teaches You What’s Attractive with Its...