GREENVILLE — As the prospect of traditional advertising could once again return over the Danish Festival City’s main trunklines — literally hanging over the roads — local event organizers are growing more and more curious. 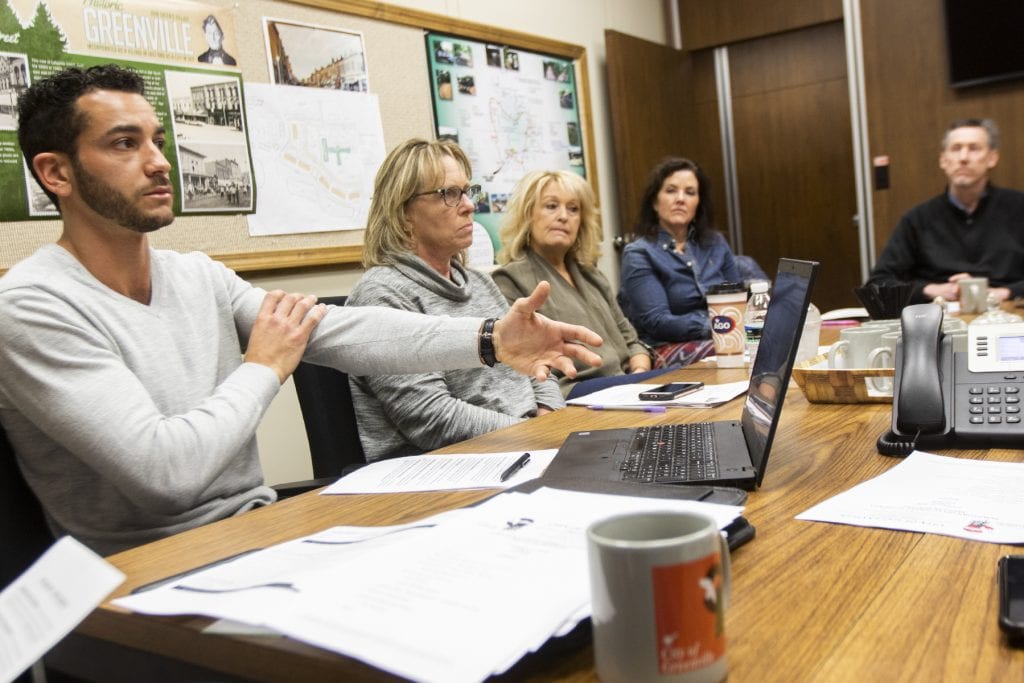 During Tuesday’s meeting of the Greenville Downtown Development Authority (DDA), the discussion continued regarding proposed poles to be installed in two locations on either side of M-57 and M-91, which would be used to hang banners over the highways to advertise events such as the Danish Festival.

Danish Festival Executive Director Kristin Griffes was joined by Julie Stafford, Daily News publisher and vendor liaison for the festival’s Lafayette Street booths. They inquired as to how likely the DDA is to have the poles installed in time for this year’s festival, which occurs Aug. 20-23.

“I’m wondering where the locations are and is that something you are going to have completed this year?” Griffes asked.

Stafford believes if the poles and banners could be installed prior to this year’s festival, it would make a difference in creating awareness to those who pass through the city that the festival is occurring in the city’s historic downtown district.

“I just think, anything we can do to get it done this year … because that was our biggest (issue) last year, the marketing of the Danish Festival,” she said. “Now as I drive through all these small towns, I see cities advertising their recreation programs and all of their festivals. So if we could get it up this summer, that would be wonderful.”

Bosanic said “that’s the plan,” but cautioned that the decision would have to be made by the DDA, pending bids that are deemed not too expensive.

“Right now we’re just working on getting the banners up and then we’ll work on a policy for who can use them, for what, when and for how much,” he said.

Previous estimates have the project at about $3,500 per pole, so at two locations, materials alone would cost about $14,000.

The DDA voted last December to let the project go out for bid, with a hopeful completion date no later than May 31.

Ralph cautioned that if bids come in at an amount deemed too expensive, the project may not happen this spring/summer.

“The whole purpose of what we’re doing is to see how much is this going to cost, to see if it’s worth going ahead with this project,” Ralph said last December.

Stafford inquired whether any other locations were suitable for the banners to be hung, specifically on M-57 east of downtown, and on M-91 south of downtown.

“Did they look toward Belding, on that end of town?” Stafford asked.

While the DDA didn’t ask Hinken to evaluate any locations on M-91 south of M-57, Ralph explained that such a location would be outside the boundaries of the DDA.

If DDA funds are utilized for the project, it must occur within its district.

Additionally, the discussion continued on the potential of adding a permanent outdoor sound system to the downtown district; however, no new information was presented since the DDA previously met in January.

It had been discussed previously that Bluewater Technologies Group based in Detroit would be willing to rent out a new system this year at a cost less than what has been paid previously for events such as the Danish Festival.

Both Griffes and Stafford said they would like to see a different system potentially utilized this year, citing difficulties with the equipment.

“Those speakers were so hyper-focused on where they were blasting the sound, the vendors were drowned out,” Stafford said. “So is this system going to broadcast a little bit wider?”

“If this project goes forward, a goal for us is to do it so it is as user-friendly as can be,” Bosanic answered. “Right now all we’re doing is exploring it, with the option of maybe pursuing it.”

Ralph said the next step will involve potential vendors visiting with the DDA to present information and potential bid packages for sounds systems before any decisions are made.

Festival of Lights cancelled in Summerland – The Golden Star

The Powerful Message of a Beloved Sculpture