Music and videogames will collide in a new festival coming to Las Vegas this fall, the latest confluence of two industries looking to bank off the booming live-entertainment business.

Metarama Gaming + Music Festival, a two-day event from the producer of Lollapalooza and Austin City Limits, is to feature sets from artists who have established reputations as videogame enthusiasts, including electronic musician Marshmello and rapper Snoop Dogg, as well as esports matches with pro gamers such as Tyler “Ninja” Blevins. Fans and casual gamers also will have a chance to compete in tournaments for prizes.

The festival comes as the music and esports industries seek new sources of revenue. While live music continues to grow, with more concerts than ever and higher ticket prices, Metarama enters a crowded festival market. Meanwhile, esports are relatively new and though rising rapidly in popularity, they are expected this year to generate less than 1% of the videogame industry’s overall projected revenue.

Revenue from concert and festival ticket sales and sponsorships rose to $27 billion globally last year and is projected to top $30 billion by 2022, according to PricewaterhouseCoopers LLP. Esports last year generated $865 million in revenue, mainly from sales of media rights, advertising and sponsorships, according to estimates from Newzoo BV. The research firm projects esports revenue to climb to $1.79 billion by 2022.

Metarama, which has been in the works for more than two years, follows several prior mashups between music and esports, including some that were orchestrated by the new festival’s organizers. Artists such as the rapper Drake have duked it out with professional gamers, and in February more than 10 million people logged in to the videogame “Fortnite” to watch Marshmello perform a free, virtual concert. At the Lollapalooza music festival in Chicago last summer, live footage of Ninja playing the same game backstage was projected on the stage between sets.

How do you think adding esports will affect music festivals?Join the conversation below.

The spread of online social games such as “Fortnite,” in which players chat through headsets or by typing out text messages, has created a demand for more live-event opportunities.

“Given the social connections born in games now, a festival combining music and esports makes sense,” said BTIG analyst Brandon Ross. “Music festivals have become one of the few places that millennials and Gen Z go to gather in person as opposed to the virtual world.”

Metarama’s organizers are hoping the hybrid experience will be enticing enough to sell some 40,000 tickets, which start at $150 for two days. “We’re competing against everything else somebody has to do that night—stay at home and watch

or go to the movies or throw an ax in an escape room,” said Charlie Walker, a partner at

C3 Presents, which is producing the festival. “There’s only so much you can do to differentiate yourself.”

The festival will be an all-ages event with two outdoor stages. In addition to live performances by artists such as rapper Logic and violinist Lindsey Stirling, pro esports teams will compete in exhibition matches, while celebrity gamers will go head-to-head with musicians in a so-called pro-am tournament. There also will be amateur esports contests, drone racing and virtual-reality experiences, among other game-related entertainment offerings—including vintage arcade, card and board games—for attendees.

“It’s very much like a circus,” said Seth Schorr, a partner at Esports Hospitality Concepts LLC, which is helping C3 organize Metarama. He stressed the festival will lean equally on music and esports, as opposed to one being a side offering.

“Up-and-coming generations expect more from their experiential activities,” Mr. Schorr said. “Five years ago it was too early, and five years from now we’re not going to be the only guys doing this.” 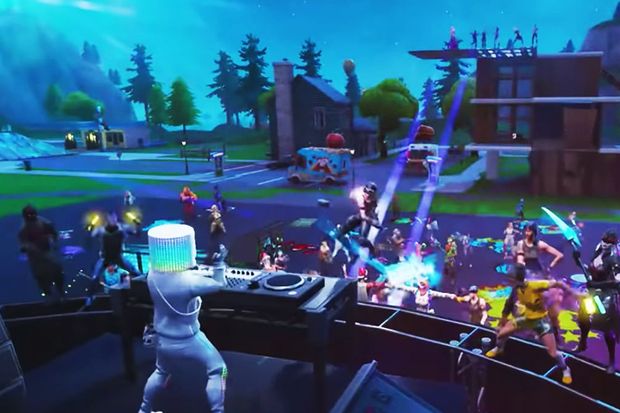 Marshmello, in avatar form, holds a virtual concert inside the videogame ‘Fortnite.’

Write to Anne Steele at Anne.Steele@wsj.com and Sarah E. Needleman at sarah.needleman@wsj.com

Kirkcudbright is getting ready to welcome foodies this weekend. The town’s annual food festival is taking place over Saturday and Sunday with plenty...
Read more
political events

This is taking projection to a whole new level. It is an amusing thing to watch, seeing the press at one time claiming they...
Read more
Festival