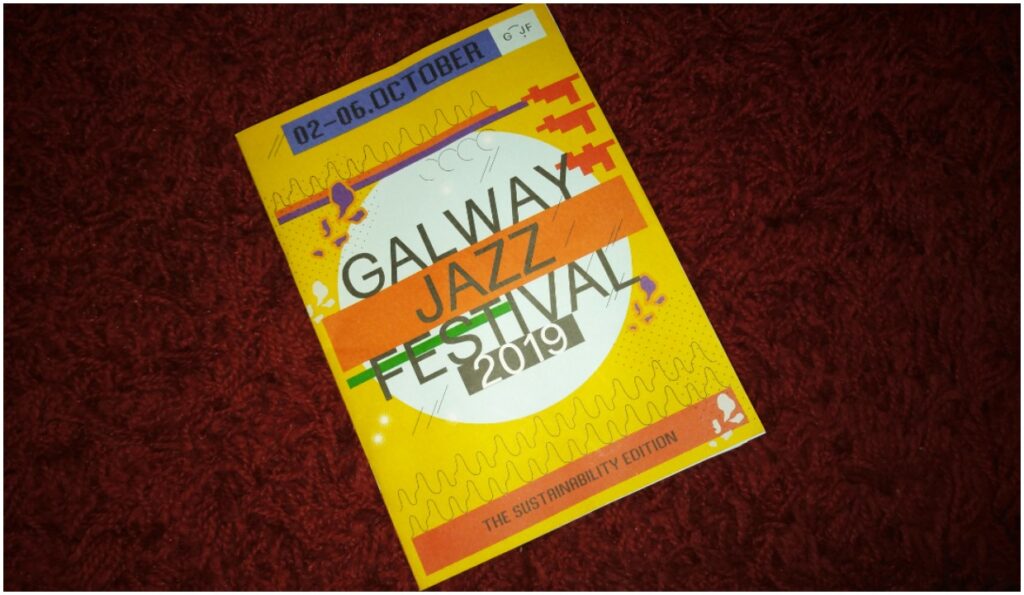 The beautiful city of Galway in the West of Ireland is not only known for its characteristic landscape and for the friendliness of its people; it is also regarded as one of the most artistically vibrant cities in the country. The Galway Jazz Festival (GJF) is fast becoming a highlight cultural event of Galway’s calendar year and a reference point for the burgeoning Irish jazz scene, with its constantly growing program packed with a wide range of exciting happenings in a wide range of venues – from small cafés to bookstores to big theaters and beyond – and a roster of great artists and various guests both local and international.

The GJF kicked things off yesterday, October 2, and will run through October 6. The program of Day 1 provided a taste of what’s to come with a concert by Cork-born pianist/composer Cormac McCarthy and his trio at a packed Blue Note; a screening of Hugo Berkeley’s documentary, The Jazz Ambassadors, at Galway’s brand new arthouse cinema, Palás; and In Flow, the unique immersive performance combining the otherworldly sounds of the Javanese Gamelan, improvisation and visuals, which guitarist/composer/facilitator Aengus Hacket talked to us about when we interviewed him a few weeks ago.

Jazz is notoriously music of expression and communication and this year, the GJF decided to honor that tradition by making it a core mission to raise awareness about the fragility of our environment and the importance of its protection. “We’ve always been very aware of it,” tells us festival director Ellen Cranitch, “but this year, we just thought we’d be going hell for leather. We’ve really pulled out all the stops to make the festival as carbon neutral and environmentally friendly as possible and have shaped our program around this central theme.”

The decision to carry this particular theme is what led to three commissions. The first, Saoirse (which translates from the Irish language as “freedom”) is a new work by singer/composer Lauren Kinsella, inspired by the Connemara style of sean-nós singing. The second, Roxy’s Head is Melted, is a piece based on activist Greta Thunberg that finds actor/writer Donal O’Kelly blending jazz, theater and spoken word. The third is Bog Bodies, a collaboration between drummer Sean Carpio, multi-instrumentalist Robert Stillman and singer Andres Holst inspired by the sounds and landscape of Connemara.

“All of these three key commissions have been responsive to either the environment or the countryside in which we live,” explains Cranitch, who also highlights, among other events, a planting ceremony that will take place towards the end of the festival in the over-1000 years old graveyard of the St. Nicholas Church. “They’ve given us a small section of that to plant up with pollinating plants. We’re calling the planting ceremony Art of the Tree-O, where we’ll be inviting the audience to come along, plant a bulb or shrub. And then there’s going to be a little gig after it.”

Other artists scheduled to perform at the GJF throughout the next few days include Norwegian fiddle player Nils Økland, pianists Kaya Draksler and Eve Risser in a duet performance and more. Also worth mentioning is the festival’s educational strand, with workshops that, as Cranitch puts it, help “build audiences for the future and introduce people to jazz and improvised music, so they can find their own voices, which I think is really important for young people.”

For more information about the Galway Jazz Festival and its upcoming events, visit the website.

In Fraser, Ignoring Sexual Harassment Claims At City Hall Means You Should Run For Office

Get A Lawyer Kid And Vote For MEEEEE! I know I keep saying this but local government is just as odd and even corrupt...
Read more
Festival

How the Cool Fool Kite Festival Took Off