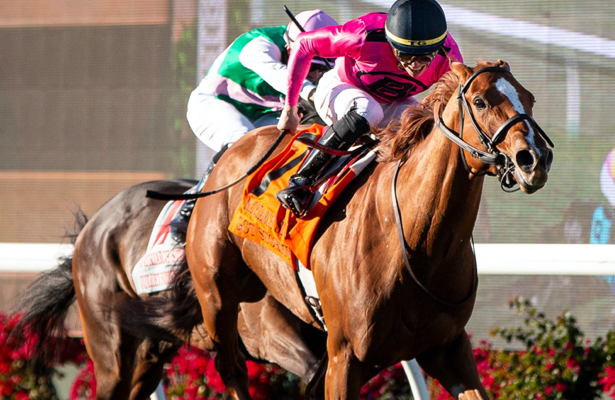 Unbeaten 3-year-old Independence Hall and Eclipse Award Turf Female finalist Got Stormy are expected to be the headliners on next Saturday’s Festival Preview Day card at Tampa Bay Downs.

The stakes-laden program consists of three graded events, topped by the 40th edition of the Grade 3, $250,000 Sam F. Davis Stakes for 3-year-olds, which is a “Road to the Kentucky Derby” points race.

The Sam F. Davis, which is run on the main track at a distance of a mile-and-a-sixteenth, is expected to attract eight or more sophomores, led by the Eclipse Thoroughbred Partners, Twin Creeks Racing Stables and Kathleen Verratti and Robert Verratti-owned colt Independence Hall, whose 3-for-3 resume includes victories in the Nashua Stakes (G3) and the Jerome Stakes (G3) at Aqueduct.

Michael Trombetta trains Independence Hall, who breezed 5 furlongs here Sunday in a minute flat, the fastest of 34 recorded workouts that day at the distance. Jose Ortiz is expected to be in town for the riding assignment.

Among those expected to challenge Independence Hall, who is considered a leading candidate for the Kentucky Derby Presented by Woodford Reserve on May 2 at Churchill Downs, are Grey Stakes (G3) winner Chapalu, trained by Arnaud Delacour; Remsen Stakes (G2) runner-up Ajaaweed, trained by Kiaran McLaughlin; trainer Michael Stidham’s stakes winner Albert Park, who finished second here in the Pasco Stakes on Jan. 18; turf stakes winner Sole Volante, from the barn of trainer Patrick Biancone; stakes-placed No Getting Over Me, trained by leading Oldsmar conditioner Gerald Bennett; and allowance winner Super John, trained by John Servis.

The Sam F. Davis, which is the major prep race for the Grade 2, $400,000 Lambholm South Tampa Bay Derby here on March 7, awards Kentucky Derby qualifying points to the first four finishers on a 10-4-2-1 scale.

Leading the list of candidates for the 21st running of the Lambholm South Endeavour is Gary Barber’s 5-year-old mare Got Stormy, whose outstanding 2019 campaign included a victory in the Fourstardave Handicap (G1) against males at Saratoga, a victory in the Matriarch Stakes (G1) at Del Mar and a runner-up effort to eventual Eclipse award winner Uni in the TVG Breeders’ Cup Mile at Santa Anita.

Mark Casse trains Got Stormy, who is 8-for-18 with career earnings of $1,430,578. The conditioner won both the Lambholm South Endeavour and the Hillsborough Stakes (G2) here in 2016 with superstar Tepin. Tyler Gaffalione will be the jockey on Got Stormy.

As of today, trainer Chad Brown was considering sending one of two 5-year-old mares from their south Florida base to Tampa Bay Downs for the Lambholm South Endeavour: Tapit Today, who won an allowance/optional claiming race here on Dec. 28, or the French-bred Altea.

While Got Stormy’s record stamps her as the class of the Lambholm South Endeavour, the 34th edition of the Tampa Bay Stakes, as of this writing, appears to have the potential to be a wide-open slugfest.
Trainer H. Graham Motion is expected to enter Calumet Farm’s 4-year-old English Bee, who won the New Kent County Virginia Derby (G3) last August at Colonial Downs. The son of English Channel is likely to face a stern test from a pair of Florida-breds: trainer Tom Proctor’s multiple stakes-winning 6-year-old gelding Caribou Club and Grade 2 winner March to the Arch, a 5-year-old Casse trainee who won the Florida Cup Touch Vodka Turf Classic here on March 31 and the Sunshine Millions Turf Stakes on Jan. 18 at Gulfstream.

The 40th Suncoast Stakes, to be contested at a distance of a mile-and-40-yards on the main track, is likely to draw eight or more sophomore fillies. Prominent among the probables are Gary Barber’s recent Gasparilla Stakes winner Two Sixty, a Florida-bred daughter of Uncaptured trained by Casse; Sandpiper Stakes winner Lucrezia, a daughter of Into Mischief owned by Beverly S. Anderson and Edward A. Seltzer and trained by Arnaud Delacour; and Godolphin-owned homebred Embossed, a daughter of Medaglia d’Oro trained by Stidham.

Also likely to compete are trainer Ken McPeek’s Motu, off since a second-place effort Nov. 30 in the Golden Rod Stakes (G2) on a sloppy track at Churchill Downs; Gasparilla third-place finisher We the Clouds and Whisper Slow, both trained by Tim Hamm; and Miss Important, who broke her maiden for McPeek on Dec. 19 at Turfway Park.

Indiependence Festival not returning to Mitchelstown

Say What?! Antifa is Set to Protest Alongside 2nd Amendment Advocates...