According to producer and screenwriter Mohamed Hefzy, the Cairo International Film Festival (CIFF) president since 2018, the 42nd round (2-10 December) was not exceptionally challenging. But this only goes to show how well prepared the three-year strategy he put in place on becoming festival president had left him.

When following a Facebook campaign criticising his political views, critic Ahmed Shawky had to resign after being announced CIFF artistic director – he was succeeding the late Youssef Cherif Rizkallah, whom he had assisted – it was a critical time, right in the middle of preparations for the festival. “So it was not easy,” Hefzy says, “but we found the alternative in setting up a bureau made up of our programmers and coordinated by one of them, Andrew Mohsen, under my own supervision.”


This, in addition to all the logistical challenges imposed by Covid-19 as well as the decision to postpone the opening from 20 November to 2 December. In November, Hefzy explains, most European countries were shut down and not enough time had elapsed since El Gouna Film Festival, also postponed from September to October.

Not for a moment did Hefzy consider cancelling the event. “If the state decided against holding festivals, we would hold activities like the Cairo Industry Days online, but not film screenings.”


Online screenings would’ve been a break with tradition, CIFF being a hub for personal interaction between international film figures, industry representatives and audience members. They would also have subjected the programme features’ to the threat of piracy. “Other festivals might deal with the pandemic by going online, but I don’t think that is an appropriate course for CIFF.”


The Ministry of Health’s presence ensured safety procedures, with spaces sanitised, face masks provided and social distancing observed. Some screenings were delayed but none were cancelled. Not a single case of infection was confirmed in the nine days of the festival.

Meanwhile, reducing the venues’ capacity by 50 percent generated unprecedented demand for tickets, which for the first time in the history of the festival were dispensed through a private company, Tazkarti, which operating both through mobile apps and the Cairo Opera House and Odeon Cinema booths did extremely well. Hefzy says he expects their performance to improve even further next year.


Additional screenings were held for the media or to accommodate the huge demand for seats when it came to films like Mayye Zayed’s Lift Like A Girl, which won three awards including the Youssef Cherif Rizkallah Audience Award. 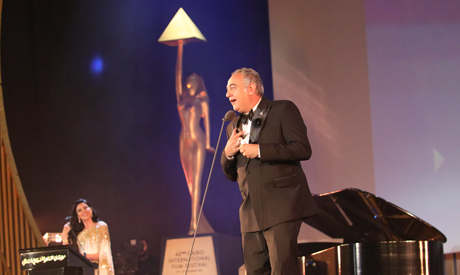 In addition to the Opera and the Odeon, the Zamalek Film Theatre would’ve hosted screenings if it hadn’t been closed due to Covid. Hefzy feels limiting the venues was a good strategy to minimise the danger of infection. His initial vision was for CIFF to spread all across the city. “But in the last two rounds, though we held screenings at Karim Cinema, Zamalek Cinema, Festival City Mall, and the Arab Mall, some of these venues had zero attendance and the audience still flocked to the Cairo Opera House.”


This means the audience is more comfortable with a single CIFF venue, something made possible by the Cairo Opera House, which Hefzy says provided better audio and video facilities than in previous years.


“I believe the Opera House is the ideal place for the festival for the foreseeable future.” Venues included the Main Hall (International Competition), the Small Hall (Arab Horizons Competition), the Hanager Theatre (the Cinema of Tomorrow Competition), the Open-Air Theatre (seminars, lectures and masterclasses), and the WE Open Theatre installed especially for CIFF, where the opening and closing ceremonies were held.

Under the circumstances, Hefzy feels, the event was a resounding success. “I couldn’t have hoped for better attendance, especially with all the Covid restrictions in place.”


Though he had planned on leaving the festival after this year, Hefzy feels Covid has altered the picture: “That’s up to the Minister of Culture, and it has not been announced yet. But I started with a three-year plan, and I feel my mission has not quite been accomplished. This does not mean I have to keep my position next year, but there should be a long-term vision and I will always be happy to contribute to that.”


He is proud of the Cairo Industry Days, an initiative he instituted to “provide a space for discussions, networking, meetings, workshops, masterclasses and partnership opportunities”, which also includes the Cairo Film Connection (CFC), a space for Arab filmmakers to present projects to be selected for both cash and in kind awards by a jury of professionals.

But Hefzy’s biggest breakthrough, he feels, is in the programming itself: “Yes, the last three rounds of CIFF attracted some of the world’s most important productions its most prominent film-industry expertise, in addition to the most important international figures as jury members compared to any other Arab festivals. But there is more to be done.”


His hope is that CIFF will be a place where filmmakers from around the world are keen on having the world or international premieres of their films.


“Some 25 percent of the programme are world and international premieres, but they are the work of aspiring filmmakers and they tend to be their director’s first or second film. My hope is that we can have premieres of work by the world’s leading directors. We also need to have a big film market where the world’s filmmakers can market their projects and meet leading producers and distributors.”


CIFF’s tradition of hosting world film stars also needs to come back, something that can happen  once the festival becomes a strong industry hub at the international level.

“This,” says Hefzy, “is how it should be evaluated as a strong film festival and what we need to work towards.”


Though this will depend on other factors – the Arab world becoming a genuine market for international films, for example, or more Arab figures becoming members of the Academy of Motion Picture Arts and Sciences (OSCAR) to encourage film figures to come here for more votes – there is still much to be done “within the framework of CIFF itself to gain international prestige, and the status it deserves on the world map not only because of its history but also because of its impact.”

In this context, while he appreciates the role of the Ministry of Culture, Hefzy believes the more financially independent is the festival the more influential it will be. “In the last three rounds CIFF has become half independent, as half of its budget is generated from sponsors in the private sector. I wish it could become fully independent one day.”


This, he feels, would be a decisive factor in CIFF making the kind of glamorous progress it deserves into the future.


*A version of this article appears in print in the 17 December, 2020 edition of Al-Ahram Weekly.

South Florida's film scene has its fair share of art cinemas offering unique programming throughout the year, and its festival circuit is no...
Read more
Festival

Festival offering fine art and wine in Surprise this weekend

Glastonbury kicks off with blazing heat