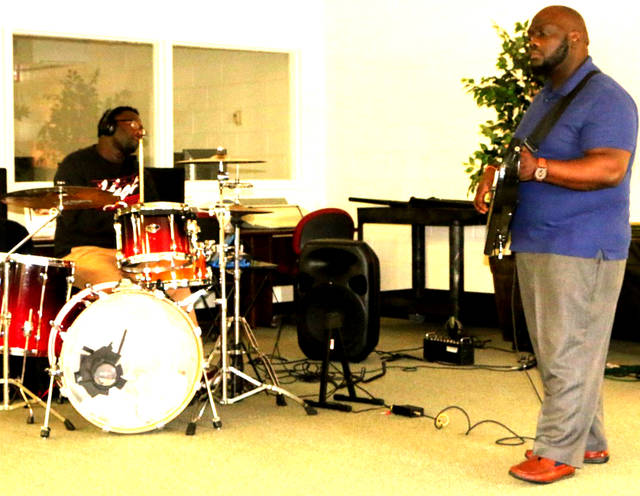 Cheraw is the hometown of jazz legend Dizzy Gillespie. The festival highlights his accomplishments in the arts and while celebrating his birthday. Over 20 regional musical artists from the Carolinas performed in locals venues around the city.

NETC featured its own David Spencer, who lives in Laurinburg and works as the communications specialist for the college. In between tunes, Spencer, a national gospel recording artist, shared how his experiences attending North Carolina Central University in undergrad helped him prepare for this moment.

“Jam sessions were an intersection of musical ideas,” he said. “Regardless of your musical background, there was always an opportunity to sit in if you wanted to.” Spencer primarily performs gospel music, but there is an undeniable relationship between the genres.

Improvising and soloing on keytar, Spencer filled the lunch break with smooth sounds of Jazz Fusion, while Laurinburg’s Von White accompanied him on the drum set.

A big music festival promoter is closing down. Here’s what that means for you...

Sankta Lucia lights up the holidays with annual festival

Déjà Vu? Why Have 15 House Republicans Announced Their Retirements?

Coronavirus: Auckland Lantern Festival cancelled for the first time in its...

Why we eat weird things, 108-course feast, and more