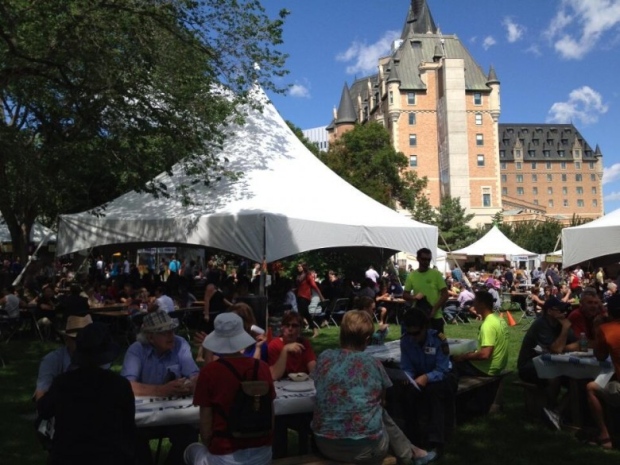 At every A Taste of Saskatchewan since 1997, Alex Istifo could be seen mixing up batches of food at the Sardinia Family Restaurant tent.

After City of Saskatoon budget deliberations on Tuesday revealed a desire to keep Kiwanis Park offline for a year to refurbish plant life, local restaurant owners like Istifo have been left to wonder about the future of the food festival.

“It’s kind of a part of every summer. Nobody takes holidays that week to prepare for it. It’s a big thing — something different than being in the restaurant every day,” Istifo said of the six-day summer staple in Saskatoon that draws huge crowds.

Participating in all but two of the festivals, Istifo has seen changes that have largely affected the festival and its success.

“It was supposed to be a taste, but when you charge for something that’s really, really not worth it, I think that’s another factor,” Istifo said.

Another of Istifo’s gripes is the shrinking revenue he receives from taking part in the festival.

On top of an $850 charge to rent a booth, SaskTel Centre — which runs A Taste of Saskatchewan every year — takes a 20 per cent cut of all profits. Adding GST and PST means 31 per cent comes off the margin of every sold item at the festival.

“You have to do it yourself,” Istifo said of the family operation at the festival. “Otherwise, if you try to hire employees to do it, you’ll never make money.”

A Taste of Saskatchewan has also distanced itself from its original intention, Istifo said, pointing to the growing number of chains taking part instead of a focus on local businesses.

“Did Red Lobster need to be there instead of giving it to local guys with family-owned restaurants? That was another disappointment (from) a lot of us (that) I saw over the years,” Istifo said.

At budget deliberations on Tuesday, SaskTel Centre executive director and CEO Will Lofdahl acknowledged that some restaurants lost money during last year’s festival.

Istifo feels the financial aspect of A Taste of Saskatchewan is due for a change as more and more money seems to be diverted away from his business.

From Apple to Samsung, 5 best deals on smart wearables you can not afford to miss

Switch flicked on Festival of Lights