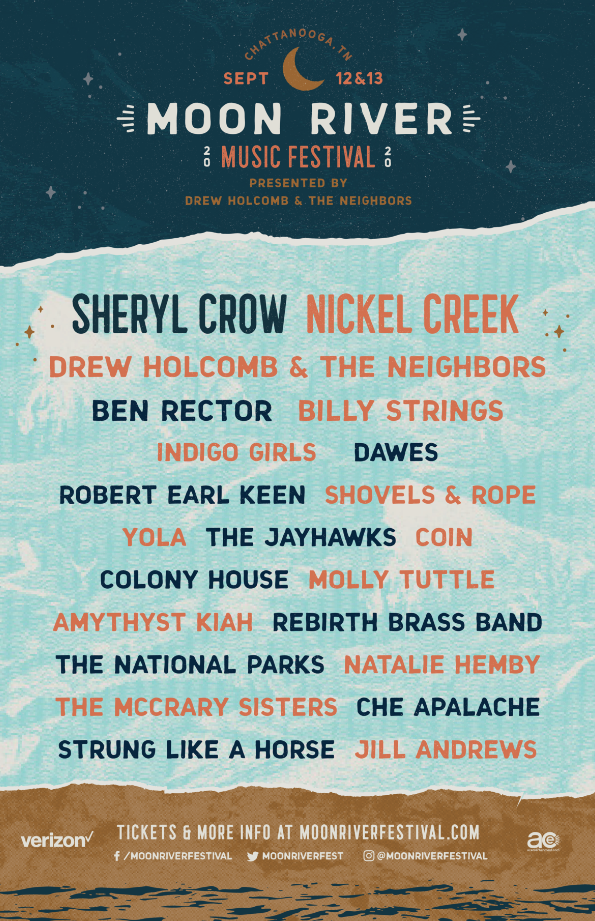 The festival is presented by Drew Holcomb & The Neighbors in partnership with AC Entertainment. The band will also be performing. Holcomb founded the festival in 2014 and hosted it in Memphis for four years. In 2018, the popularity of the event outgrew the venue space and Holcomb worked with the city of Chattanooga to move the festival there.

“Absolutely thrilled to invite folks back to Coolidge Park in beautiful Chattanooga, Tennessee this September,” Holcom said. “I could not be more proud of this year’s lineup and cannot wait to share the stage with them! See you in September.”

The event represents a strong, thoughtful, strategic partnership between Holcomb and the city. Beginning in 2018, the relationship between the two has only strengthened.

“In just a few short years, Moon River Festival has become one of the most eagerly anticipated annual events in our community,” Chattanooga Mayor Andy Berke said. “I’m thrilled that they will continue to call Chattanooga home, and I look forward to working with Drew and Ellie Holcomb to make the festival even bigger and better in the years to come.”

The event has also been a boon for Chattanooga-area non-profits. Friends of Outdoor Chattanooga and St. Jude Children’s Hospital of Tennessee are the direct beneficiaries of over $20,000 in annual ticket donations.

The iconic Sheryl Crow and Nickel Creek are co-headlining the festival.

Crow is a nine-time Grammy winner who’s sold over 50 million albums worldwide. The singer-songwriter incorporates elements of pop, rock, country, jazz and blues and has recorded 10 studio albums, as well as several compilations, live albums and soundtrack singles. She dominated the 1990s with singles including “If It Makes You Happy,” “All I Wanna Do” and “Everyday Is A Winding Road.”

Nickel Creek is an American band based out of southern California who’ve been together since 1989. They’ve recorded six studio albums, breaking out in 2000 with their self-titled album, which went platinum and included the hit single “When You Come Back Down.” Their next album, This Side, won the 2003 Grammy for Best Contemporary Folk Album.

General admission and VIP weekend passes are on sale now and can be purchased here.

The Mix: Square Roots Festival, Teatro ZinZanni and more things to do in Chicago...