TOKYO — Can art ever be appreciated out of context?

That’s a question the lead character grapples with in Taiwanese film “The Painting of Evil,” director Chen Yung-chi’s entry in this year’s Tokyo International Film Festival. Attacked by grieving families when he decides to exhibit paintings by a prisoner on death row, he cries “art for art’s sake!”

Impossible to ignore that the 33rd Tokyo International Film Festival was being held in the middle of a pandemic that has shuttered cinemas worldwide, all in all the festival screened 138 films with over 40,500 moviegoers attending, a 37% decrease from last year. Movie theaters in Japan, where universal mask-wearing may have helped prevent a public health crisis, have been operating at full capacity since September after the government relaxed a 50% cap on occupancy.

Major sponsor Toho Cinemas was riding high even before the festival opened on October 31 after a film based on the manga “Kimetsu no Yaiba” broke Japan’s opening weekend domestic box office record, previously held by Disney’s “Frozen 2.”

Kimetsu’s success followed that of two other Japanese animated films this year: “Kyo Kara Ore Wa,” which grossed over $50 million in July despite halved theater occupancy, and a new “Doraemon” film in August that brought in more than $30 million in domestic ticket sales. 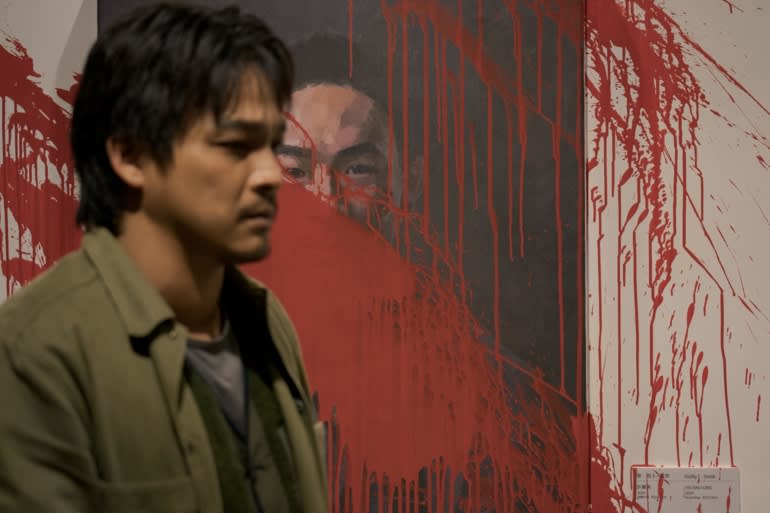 The artist and his criminal subject at the center of Chen Yung-chi’s The Painting of Evil.

“We were very nervous, but it was a major success even by normal circumstances,” said Hiro Matsuoka, executive managing director of Toho of the decision to release “Kyo Kara Ore Wa.”

That success gave Toho hope that Hollywood would release upcoming titles in Asia earlier than in the U.S. market. But one by one, major studios delayed blockbuster releases such as “No Time To Die,” the latest James Bond installment, and Marvel’s “Black Widow.”

Given the 54-46 ratio of domestic and international film revenue for Toho over the past three years, Matsuoka told Nikkei Asia that COVID-19 “is really hurting us, but it isn’t killing us.” Even without Hollywood titles, Matsuoka credited Japan’s strong domestic film industry for keeping cinemas afloat.

“We ended up surviving better simply because we have a strong domestic product,” said Matsuoka, speculating that watching anime on streaming services during Japan’s six-week state of emergency earlier this year may have created an appetite for the Kimetsu film.

Like Japan, India’s cinema industry is hoping to peg its recovery on its strong local film industry after the government allowed operations to resume last month. For Indian cinema operator PVR Cinemas, international films comprise only a quarter of revenue, while Bollywood brings in half and the remaining 25% comes from regional pictures.

“To us, this period is not so much about recovery in numbers as it is about earning customer trust and confidence,” Gautam Dutta, CEO of PVR Cinemas, told Nikkei Asia. “Although occupancy in theaters will take some time to improve, it is heartening to see how audiences have responded in these initial days.”

India’s only entry at TIFF was the family dramedy “Ashes on a Road Trip,” in which a patriarch leaves instructions for his ashes to be scattered on the family’s ancestral land. Taiwan entry “Jang-Gae: The Foreigner,” explored similar themes in a film about a Korean high schooler bullied for being half-Chinese who then comes to accept his heritage when he delivers his father’s ashes home to Taiwan. Jang-Gae — derogatory Korean slang for Chinese — was the debut film for Taiwanese director Chang Chih-wei.

Other films to premiere at TIFF included Philippine director Antoinette Jadaone’s “Fan Girl” in which a starstruck girl sneaks into an actor’s house and sees a horrifying truth. One can only imagine what rating Philippine film censors would have slapped on the film, Jadaone’s most provocative offering yet, had it premiered at home. The only part of TIFF that had to be moved online were the Talk Salons allowing foreign directors and actors who unable to travel to Tokyo because of the pandemic to address audiences.

The ten-day event, one of Asia’s two competitive film festivals, closed Monday, with Japanese director Akiko Ohku’s romantic comedy “Hold Me Back” winning the Audience Award. Organizers did away with traditional awards such as best film, best director, and best actor, instead allowing moviegoers to vote with paper slips as they exited the cinema.

Another audience favorite was “Mr. Suzuki: A Man in God’s Country,” by Japanese director Omoi Sasaki, who crowdfunded the film. Popular Japanese comedian Asako Ito warned audiences to expect her darkest character yet — an unmarried woman approaching middle age in a dystopian society where young people are paired off to salvage a declining birthrate.

Sasaki insisted in a Q&A that his film was not set in Japan, and that he did not have Japan in mind when he wrote the screenplay. Still, it would be near impossible to remove a Japanese film by a Japanese director with a Japanese cast from the context of Japan’s own declining birthrate woes.

During a week that seemed to involve the whole world in a painfully long wait for the U.S. election results, TIFF provided the perfect respite, save for one important element — popcorn. While concessions were open, food had to be consumed before entering the cinema to prevent people from taking off their masks inside the cinema. Can movies ever be the same without popcorn?

Heading to the beach for a mega 4th of July party? This toes-in-the-sand inspiration crafted by Virtuous Events and Two Birds Photography brings the essence of a...
Read more
political events

Senator Kelly Loeffler lost her election bid against the good Reverend Raphael Warnock, and that is a tragedy which all of America will...
Read more
political events

The Senate’s impeachment trial officially got underway earlier today and, as expected, it was high on theatrics, emotion, and the predictable media gushing...
Read more