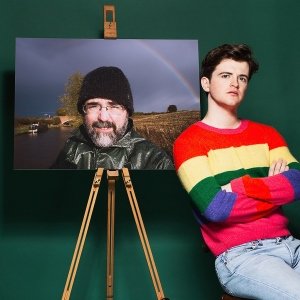 Simon David is gay, and this is made abundantly clear from the beginning when dressed in sequin suit, fishnet vest and beret, David opens the show with a very catchy and energetic musical number involving a stair and loads of exaggerated dance moves. In less than a minute the audience is laughing and singing with David, having a wonderful time and I am glad for choosing this performance to start my 2020 Vault Festival experience.

If like me you are not familiar with David, he is a 20-something comedian and musical director that debuted his first one-man show called Virgin at the Edinburgh Fringe Festival in 2018; David sings, dances, plays the piano and he is hilarious. The first part of the show is all about himself, David talks about his previous show, his experience in directing some gay musicals in London and plays the part of the vapid self-centred homosexual joking around his lack of personality beyond his sexuality.

David talks about ideas for his second one-man show (this one, directed by Chris Larner), including a Date Night show where he flirts with a member of the audience in a simulated first date. Some may say that this first part is a bit light and not exceptionally original, but I really enjoyed it, David has great comedic timings, he is funny, talented, energetic and over-the-top in a positive way.

The mood changes completely in the second part and this is reflected by the way David is dressed: from sequin suit and vest to a baggy hoodie. David talks about his father living in Newcastle that was diagnosed with terminal bowel cancer a couple of years back and given 24 months to live. It is not an easy topic and many people’s nightmare; however, David has found a touching and gentle way to present it and to keep laughing about it without being disrespectful. David talks about the progression of the cancer, chemo and radiotherapy, and his father’s decision to do a very profound one-man show about his illness and the meaning of life. This show was recorded, so David alternates the story with clips from the father’s show and he manages to play with his dad’s recording, to make fun of him in a gentle and loving way and to squeeze in some more musical numbers.

Understandably this second part is not laugh-out-loud and as light as the first one, at moments you can hear a pin drop in the absolute silence of the audience, fully focused on the story; but I enjoyed it nonetheless, it was moving, it was funny and it was enlightening, I would love to get the chance to see the full recording of the father’s show, he looked like a very humble and gentle man.

I do not know if David will ever be a big TV star, a lot is down to luck, but he is a very talented person and he managed to make me laugh, to make me think, to make me feel emotional and to nearly cry, all in 60 minutes. I hope in the future to have a chance to see his first show where he talks about being a virgin gay man and look forward to his third show, whenever it will be available, as I will definitely keep an eye out for Simon David.

Simon David is ready to perform his brand new, all-singing, all-dancing show, ‘Date Night!’ where one lucky spectator will win a date with the star live on stage!

But then his father is diagnosed with terminal cancer. And just months before he dies, writes, performs and films his own one-man show about his illness, mortality and legacy.

Far too juicy to ignore, does Simon follow in his father’s footsteps or continue with his camp cabaret?

Reaching for 2020, Beto O’Rourke Tries to Cash In on Ben Shapiro’s Name. Shapiro...

The Left Is Celebrating David Koch’s Passing, Ignorant of How Much they Agree With...

Exit 111 Festival will not return to Manchester in 2020

Over 250 artists featured at 32nd Annual Downtown Sarasota Festival of...