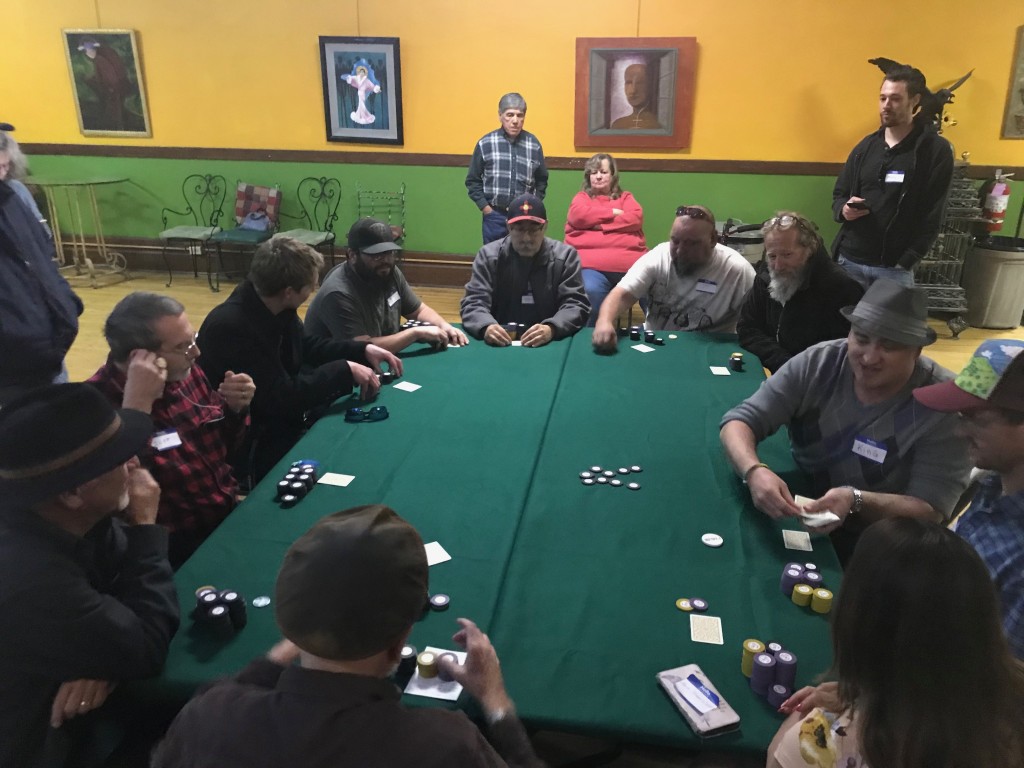 Whether you play weekly with friends or just want to try out your luck for the first time, everyone is welcome to participate in this year’s CLAY Festival Poker Tournament Fundraiser on Saturday at the Murray Hotel.

Lee Gruber, founder and director of the CLAY Festival, said the tournament, which has been going on for seven years, is one of two fundraisers for the festival.

Years ago, Jessie Thetford worked for Gruber during the early years of the CLAY Festival. Jessie and her husband, Tanner, used to work in Las Vegas, and Tanner told Gruber that high-quality poker chips are made out of ceramic clay.

“They were both real fans of poker,” Gruber said.

Jessie and Tanner suggested that the CLAY Festival purchase poker chips to start a tournament as a fundraiser, and Gruber went for it. The poker chips are the same colors as the festival’s logo.

Gruber said that professional poker players listen to the sound the chips make in their hands.

“So there is a certain sound that indicates it’s a … high-class chip,” she said.

Registration fee for the Texas Hold’em tournament is $50 — technically a donation to the CLAY Festival — and the event will be held Saturday in the Murray Hotel ballroom, located at 200 W. Broadway. The tournament kicks off at 3 p.m. and ends around 9, Gruber said.

So far, 20 people have registered, and folks still have a chance to join in by visiting clayfestival.com, calling 538-5560 or heading to the Murray Ryan Visitor Center, located at 201 N. Hudson St. Registration will also be available at the door Saturday.

King Crowder, one of the owners of The Duckstop food truck, will host the tournament for the second time. He’s been playing Texas Hold’em since he was 18, and said he wanted to be a professional poker player when he was in his 20s. Instead, he became a chef.

Crowder likes “the camaraderie and the competition of the game Texas Hold’em,” he said, including “the strategic elements.”

Crowder will oversee the dealing and explain the rules of the game. There will be about eight tables, with six to seven players at each. Winners at each table will then move on to the final game. Gruber said that there are 10 prizes, and the top winner gets the first pick. Some of the prizes include a weeklong vacation at a condo in Flagstaff, gift certificates from restaurants and works of art.

Gruber said the largest participation at past tournaments was 44 people, and a mix of all kinds of people show up to play — ranchers, miners, students, professors and business owners. Folks are also welcome to come watch the poker tournament, Gruber said.

“It’s just a mix of ages of women and men, and people from many different backgrounds,” she said. “So it’s a lot of fun, because everybody is there just to play poker. I view it as a very successful event.”

Pizza and snacks will be offered. Crowder will host a training for volunteer dealers today at 4 p.m. at the Murray Hotel, and another Saturday at 2 p.m. Dealers are still needed for this year’s tournament.

This year’s CLAY Festival is scheduled for July 13-19.

C.P. Thompson may be reached at cp@scdaily press.com.

Fitchburg Festival of Speed competitions include bikers of all experiences, age levels