Love movies? Love music? Love movies about music? Then Sound Unseen, the film + music festival, is up your alley. Though you probably already knew that, since this will be its 21st year.

Born in Minneapolis in 1999, Sound Unseen is proudly niche and always diverse. This is the first time it will take place in two states, Minnesota and Texas. (This year, you can watch the films from anywhere in Minnesota, not just Minneapolis.) Why Texas? Festival director Jim Brunzell lives in Austin. He moved there in 2014 to serve as artistic director for aGliff, the All Genders, Lifestyles and Identities Film Festival. Program director Richard Gill lives here; he’s assistant manager of the Uptown Theatre.

This will also be the first time, and hopefully the last, the festival will be all virtual, from the screenings to the events. The films will be geolocked; the events, including discussions and panels, will be global. Part of the fun of Sound Unseen has always been gathering with other music nerds in multiple venues for parties, movies and panels. We’ll miss that this year.

Here’s the whole lineup, with links to synopses, trailers and tickets. A half-dozen films that caught our eye:

The opening night selection: “Sound of Metal,” directed by Darius Marder. This was part of the Twin Cities Film Fest, so it’s not a Minnesota premiere (but it is a Texas premiere). Emmy winner Riz Ahmed (“The Night Of,” “The OA”) stars as a heavy metal drummer who begins to lose his hearing. Critics love this film.

The centerpiece selection: “The Bee Gees: How Can You Mend a Broken Heart?” directed by Frank Marshall (“The Curious Case of Benjamin Button,” “Seabiscuit”). The highs and lows, the ups and downs, the heart and soul of working with your brothers. About this film, Brunzell told the Austin Chronicle, “I’d always written them off as cheesy disco, but I was wrong.”

“Never Too Late: The Doc Severinsen Story,” directed by Kevin Bright and Jeff Consiglio. The former bandleader of “The Tonight Show Starring Johnny Carson,” Doc has a lot of fans in Minnesota. He was principal pops conductor for the Minnesota Orchestra for 14 years and became its pops conductor laureate in April 2007, a position he holds to this day. At 93, he’s still a great trumpeter and a sharp dresser. The first screening (Saturday at 1:30 p.m.) will be followed immediately by a live virtual Q&A featuring Severinsen and the directors.

“Uprooted: The Journey of Jazz Dance,” directed by Khadifa Wong. Minnesota has a jazz dance history, and it’s too bad we can’t watch this film together with some of our dancers. Wong, a former dancer, explores the history and evolution of the form, including its roots in slavery.

“Queens of the Revolution,” directed by Rebecca Heidenberg. Sound Unseen snagged three world premieres; the other two are shorts. “Queens” tells the story of El Mejunje, a cultural center in Santa Clara, Cuba, that paved the way for LGBTQIA rights in the island nation, despite great persecution.

The closing night selection: “Zappa,” directed by Alex Winter, narrated by Frank Zappa in his own words. The director had complete access to the Zappa family trust and all archival footage. If you’re a fan, you’ll for sure want to see this. If you want to understand Zappa’s place in the music pantheon, this is the place to begin.

OK, just one more: “Molto Bella,” directed by Alexander Jeffrey. It’s a tale of a folk singer (she) and a poet (he) who meet and fall in love. Whatever! It’s filmed in Taormina, the most beautiful town in Sicily. In a time when we can’t travel (and winter is coming), it’s sweet, delicious eye candy.

Among the festival’s events: An anniversary discussion of “Pump Up the Volume,” with writer/director Allan Moyle, producer Sandy Stern and actress Samantha Mathis; “Fear and Loving in South Minneapolis: A Conversation with Jim Walsh”; and a live discussion and Q&A with the Go Go’s Kathy Valentine about her new book, “All I Ever Wanted: A Rock ’n’ Roll Memoir.”

V is for virtual, L is for live and in person. 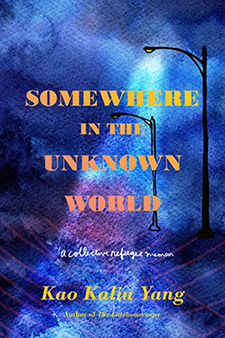 V Tonight (Tuesday, Nov. 10) on Crowdcast: Subtext Books: Book launch for Kao Kalia Yang’s “Somewhere in the Unknown World.” A prolific, sensitive and lyrical writer, Yang will read from her latest: a collection of powerful stories of refugees who have found new lives and homes in the Twin Cities, retold from oral interviews. Who are they, where have they come from, how do they live, what have they lost – and found? Yang will be in conversation with Micaela Schuneman, director of refugee resettlement for International institute of MN. 7 p.m. Free, with registration required. If you can’t make this virtual event, four more are scheduled for the next several days including one with the author’s alma mater, Carleton College. On Thursday, Nov. 12, the Loft will host a webinar, “Refugee Stories: Kao Kalia Yang in Conversation with Jessica Goudeau.” Goudeau is the author of “After the Last Border: Two Families and the Story of Refuge in America.” 2-3:15 p.m. FMI and tickets ($10/5 Loft members).

V Now on Minnesota Opera’s website: “Art vs. the Artist: Wagner’s Das Rheingold.” Ahead of Minnesota Opera’s virtual presentation of its 2016 production of Wagner’s “Das Rheingold,” the opera gathered a panel of experts to talk about Wagner, his enormous influence, and the problems of presenting work by a notorious antisemite in 2020. The panelists were Priti Gandhi, vice president, artistic for Minnesota Opera; Alex Ross, music critic for the New Yorker and author of three books including his most recent, “Wagnerism: Art and Politics in the Shadow of Music”; and Hilan Warshaw, a New York-based filmmaker, writer and educator whose films include the feature-length documentary “Wagner’s Jews.” This writer was the moderator.

V Tomorrow (Wednesday, Nov. 11) through Tuesday, Nov. 24 online: MSP Film Society: Wednesdays with Wiseman: “Sinai Field Mission.” MSP Film Society concludes its Frederic Wiseman mini-festival with his 1978 documentary about life at the U.S. Sinai Field Mission, the early warning system established in 1976 following the war between Egypt and Israel. 127. FMI including trailer and tickets ($10/5). The film is followed by a recorded conversation with Wiseman and Oscar winner Errol Morris (“The Fog of War”).

V Thursday (Nov. 12) on the Schubert Club website: Courtroom Concert: Flying Forms. A baroque chamber music ensemble based in St. Paul, Flying Forms features Marc Levine on baroque violin, Tulio Rondón on baroque cello and viola da gamba, and Tami Morse on harpsichord. For their Courtroom Concert, they’ll play trios by Italian composer Giovanni Benedetto Platti on instruments and keyboards from the Schubert Club Museum. Plus Morse will take you inside a harpsichord to explore its inner workings. (Did you know the harpsichord is a plucked instrument, like a guitar? Not hammered, like a piano?) Recorded in Courtroom 317 of Landmark Center, hosted by Abbie Betinis, this event will be a streamed video of a new program, not something you’ve seen before. 12 noon. Free.

Screenshot from this video Jill Biden, the wife of former Vice President Joe Biden who is presently running for the Democratic nomination for president,...
Read more
political events

Law enforcement from different agencies work the scene of a shooting at a shopping mall in El Paso, Texas, on Saturday, Aug. 3,...
Read more
Festival