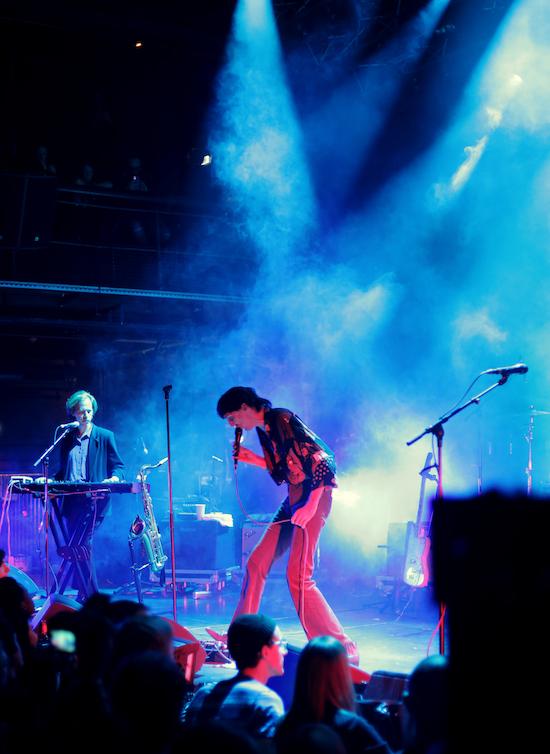 When Deerhuter’s Bradford Cox was just 12 years of age he met Tim Gane, of his favourite band Stereolab, and when the older musician told the young boy that “juxtaposition” was his favourite word, it soon became Cox’s too. It’s rare that pre-teen love affairs with artists will continue with similar levels of adoration into adult years but on stage at Synästhesie Festival in Berlin, aged 37, Cox is dedicating his 2019 track ‘Nocturne’ to Gane and the band, as he expresses thanks, love and apologies. “We nicked it off ya,” he says with a mock English accent he has decided to adopt for half of the show. The band then glide into a track that sure enough possesses some key Stereolab trademarks: sultry and infectious bass lines, plinky-plonky synth lines that feel both abstract and seamlessly melodic and the general harmonic coalescence between pop and anti-pop.

The night before Stereolab were on stage stretching out the lineage of their own cultural heritage themselves. During a performance that was as flush-tight as it was spaciously loose, they buzzed through an ostensible greatest hits set that added to an unfolding narrative taking place via the festival’s thoughtful billing. The two day event at Kulturbrauerei, an old brewing site and now cultural centre in the city, is run by the local independent venue 8mm and presents a mix of bands ranging from the scuzzy garage of Black Lips to the shoegaze noise of A Place To Bury Strangers via “the Hendrix of the Sahara” Mdou Moctar – plus a selection of German bands such as Shybits, Go Lamborghini Go and Holygram. However, there’s a trio of artists on the bill whose legacy stretches over near enough five decades, several countries and over 20 albums that when watching them play across the weekend reveals an inescapable connectivity: Michael Rother, Stereolab and Deerhunter.

Cox has been incredibly forthcoming and gushing about his love for Stereolab for years, citing Cobra And Phases Group Play Voltage In The Milky Night as his favourite album of all time, once saying of it in his tQ Baker’s Dozen: “It really has driven the direction of Deerhunter. Every graphic I’ve ever done or drawing I’ve ever made.”

It’s a theme he continued in conversation with Lætitia Sadier for Under The Radar magazine, saying of his love for the album: “All I can do is preach this insane gospel.” His need to spread the word so emphatically is perhaps also down to some of the critical panning it got at the time, from a 3.4 on Pitchfork to NME opening its review with the line: “Well, you have to admit they’re good at what they do. But then so was Hitler.” Cox’s evangelical words came at a time when Stereolab were perhaps most out of favour – even though their timeline alignment with Britpop had them positioned as outsiders pretty early on – with them being freshly broken up and interest on the wane. For a generation of young kids getting into Deerhunter passionately, it seems almost impossible that they wouldn’t have been turned onto Stereolab at some point in some capacity. The band playing a small role in keeping the lights on and the home fires burning while Stereolab took a ten-year leave of absence.

This is something mirrored almost entirely in the relationship between Stereolab and Michael Rother. In the 1990s as Stereolab soared to become one of the most beloved cult bands of the era, Rother was in something of an anguished state of limbo. With interest in his own music arguably at an all time low and him wrapped up in endless personal and legal battles with his ex bandmate Klaus Dinger, Stereolab’s nods to his work via song and album titles, clear musical inspiration and name-drops in interviews kept interest alive and opened him up to an entire new generation of people, even if the only thing around at the time they could buy was most likely a bootleg Neu! CD. How Deerhunter sound today in 2019, be it intentional or inadvertent, has a lot to do with with how Neu! did all the way back in 1972. These three bands feel fundamentally connected on a deep rooted level that goes beyond simple influence and inspiration and instead represents something of a cultural baton that has been sacredly passed between them, with each adding, tweaking, twisting and expanding along the way. 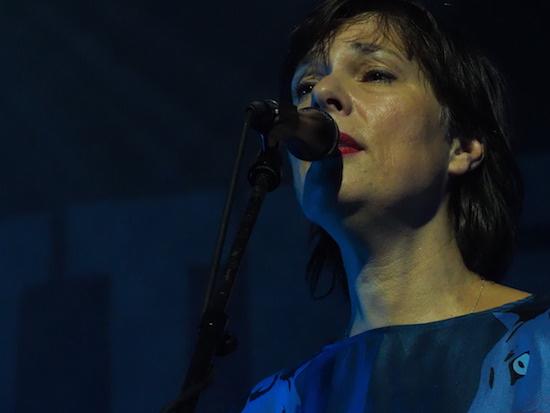 As though intended to hit home this lineage, the bands play over the weekend in historical order. The world has finally caught up with Rother’s output and for some time have been able to buy his records with ease and in 2019 there’s a renewed sense of purpose and a potent feeling of rejuvenation in his performances. There’s little in the way of nostalgia here and instead the tracks feel like supercharged renditions that are making up for lost time. The sense of infinity that seeped from every inch of Neu! records via hurtling elongated grooves still feel locked into that propulsive state – as though long lost siblings have reconnected and reignited a relationship.

As Rother and his band blast through the likes of ‘Hallogallo’ and ‘Isi’ – with drums that sound like they could propel a plane off the ground and guitars that weave gracefully between teeth-grinding rawness and aquatic flowing melodies – the connection found during the extended outro to Stereolab’s ‘Lo Boob Oscillator’ is so in sync and part of the evolutionary process that they almost feel as one. Elsewhere the band feel electric at times, the pulsing mantra-like beat of ‘Metronomic Underground’ is dizzying in its brilliant crashing crescendo whilst the tropicália skip of ‘Ping Pong’ shows how easily the band can dip into other styles whilst still retaining such a consistent sonic essence. The following day when Deerhunter lock into the stretched-out outro of ‘Desire Lines’ which unfurls via corkscrew-spiralling guitar lines and hyper-taut grooves, there once again feels an inherent connection between all these tracks.

Of course there’s no stark new revelations here that Stereolab were influenced by Neu! and Deerhunter by Stereolab, but when it’s clear that any old charlatan can mimic a motorik beat or a swooping synth melody in supposed homage (see any number of dull 2010s indie bands) there’s a deeper and more intrinsic cultural connection that emerges when hearing all three play next to one another – especially when they all sound so distinct and idiosyncratic yet will remain forever intertwined.

Aftershock festival to return in 2021 with Limp Bizkit and Metallica, full lineup announced

Utah’s Festival of Trees is moving to The Viv, ‘reimagined’ for virtual viewing

Artscape street closures start Monday, and the festival boundaries have changed. Here’s what you...

With Republicans Like These, Does Texas Even Need Democrats?

Man Armed With 100 Rounds of Ammo in a Missouri Walmart...

Nancy Pelosi Calls On Trump’s Family & Staff to Stage an...