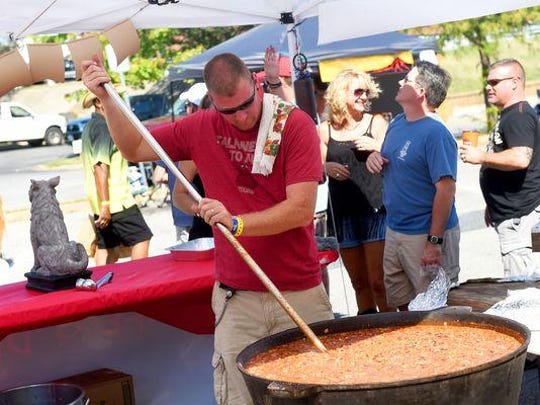 This year, the Virginia Chili, Blues and Brews Festival in Waynesboro will be missing something — waste.

WAYNESBORO — Last year, organizers of the Virginia Chili, Blues and Brews Festival sent over 30,000 cups and spoons directly to the landfill. This Saturday, the event will make history as Waynesboro’s first zero waste festival, according to a release.

In March 2019, the City of Waynesboro suspended its plastic recycling program.

“Like anything in life, you can either sit down and accept things, or stand up and do something,” festival organizer Terry Short said. “At the Virginia Chili, Blues and Brews Festival, we’ve decided to do something.”

All of the drink cups, serving cups and utensils at the event will be made out of compostable material. There will also be composting demonstrations and incentives for chili competitors to help educate patrons about eco-friendly habits, Short said.

More: Staunton has a new community compost: Here’s how to use it

More: Creating a green future in Staunton, one compost bin at a time

The 12th Annual Virginia Chili, Blue and Brews Festival will be held Sept. 28 from 2:30-9 p.m.at the Lumos Plaza in Waynesboro. Attendees will be able to sample chili, listen to blues music, check out artisans and vendors and enjoy local brews — all while minimizing their environmental impact. Ticket and event information can be found at virginiachili.com.

What will be at the festival?

Things to sip on:

And of course, there will be plenty of chili to sample.

Share any questions, comments or story ideas with Leanna Smith at lsmith@newsleader.com. Connect with her on Twitter @LeannaCSmith.

The future of the Staunton Mall: Readers weigh in

What led to the controversy surrounding Sheriff Donald Smith

15 Tips for Writing Your Own Wedding Vows

No, It’s Not Dave Chappelle’s Fault That a Transgender Comedian Committed Suicide